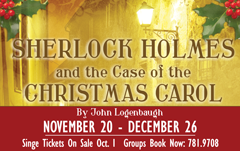 SEATTLE – July 7 – Taproot Theatre is excited to announce its holiday production: the world premiere of John Longenbaugh’s Sherlock Holmes and the Case of the Christmas Carol. Longenbaugh, a Seattle playwright and author, has created a holiday mystery that will delight the entire family.

These then are the facts: The year, 1894. The date, Christmas Eve. The location, 221B Baker Street. After being presumed dead for three years, a hardened Sherlock Holmes resurfaces, turning his back on the people who need him most. Three unexpected callers arrive on Christmas Eve uncovering clues from the detective's past, present and future. Can they save Holmes and his world from a dire end? They must "do it all in one night" to accomplish the task.

Sherlock Holmes and the Case of the Christmas Carol opens on November 27 and runs through December 26, with low-price previews on November 20 & 21, plus a pay-what-you-can performance on November 25. Tickets go on sale to the public on October 1; 2009 subscribers may preorder their tickets with their 2010 subscription renewal.

Taproot Theatre Company is a professional, non-profit theatre company with a multi-faceted production program. Founded in 1976, Taproot Theatre serves the Pacific Northwest with Mainstage Productions, Touring Productions and Acting Studio. Taproot exists to create theatre that explores the beauty and questions of life while bringing hope to our search for meaning. Taproot Theatre Company is a member of Theatre Communications Group (TCG), Theatre Puget Sound (TPS), and the Greenwood-Phinney Chamber of Commerce.
Posted by Art Up Greenwood-Phinney at 10:40 AM