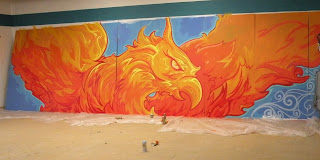 Taproot Theatre has commissioned 3 Seattle artists to create a mural installation on an 8 ft high by 89 foot long temporary wall in honor of the businesses that were lost after the arsons in our neighborhood. Above is an in progress shot of the main focal point of the mural symbolizing the re-birth of the Greenwood neighborhood - the phoenix rising from its ashes. When first contacted by Taproot, the artists got together to brainstorm ideas that would best resonate with the community and Zach Bohnenkamp, one of the 3 artists came up with the idea of the Phoenix. Other features of the mural will include a scene from the annual car show, a fireman rescuing a PAWs cat, and a call to action for the monthly artwalk "Art Up Greenwood-Phinney".

You may recognize the handiwork of these three artists: John Osgood, Kevin "Sensei23" Sullivan and Zach Bohnenkamp from the recently installed mural at ProSki on Aurora. Neighbors who have heard about the mural have been waiting to see the artists working on the wall outdoors, but the artists have been stealthily cloistered in a nearby location and the mural will not be totally revealed until the unveiling ceremony TBA soon. The artists are a part of Seattle Mural Art which is an affliate of Bherd Studios Gallery located in Greenwood.
Posted by Art Up Greenwood-Phinney at 1:25 PM