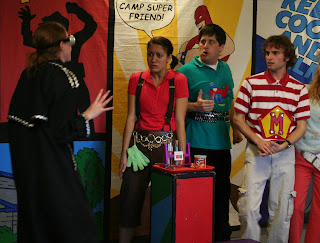 SEATTLE – June 18, 2009 – Five superheroes in the form of actors are using their super powers to stomp out bullying this August at the New York International Fringe Festival, FringeNYC. Taproot Theatre’s Road Company will be in New York August 13-24 to perform its anti-bullying play Camp Super Friend in FringeJR, the family portion of the festival.

The Road Company performs social-issues plays at schools around the Pacific Northwest; it reached 80,000 kids and teens with its three educational touring plays during the 2008/2009 school year. Weaving a superhero story with principles from Committee for Children’s “Steps to Respect” program, Camp Super Friend teaches students how to prevent bullying, make friends, appreciate differences, and much more.

Camp Super Friend by Bethany Wallace follows Marvel, a superhero who, despite his super powers, doesn’t know how to be a super friend… yet. At Super Camp, the summer camp for superheroes, he learns just in time, as the evil Professor Nemesis has come up with a sinister plan to strip all the superheroes of their powers. It’s up to Marvel and his new friends to use their special gifts and work together to save the day.

Taproot Theatre’s Road Company has performed Camp Super Friend for over 40,000 students since it commissioned the play in 2007. Many of those students have been victims of bullying, or even bullies themselves; in the United States, 15 to 25 percent of students are believed to be bullied from time to time, according to the U.S. Department of Health and Human Services. The Road Company’s plays provide students with tools to help prevent bullying and harassment.

The trip to FringeNYC is funded by Dave and Liz McFadzean, Jerry and Diane Thompson, David and Joan Selvig, and Boeing. The Road Company is supported by 4Culture, ArtsFund, The Charles Simonyi Fund for Arts and Science, the Washington State Arts Commission, Nesholm Family Foundation, PONCHO and the Fred Meyer Fund. The media sponsor is ParentMap.

About Taproot Theatre’s Road Company
Taproot Theatre’s Road Company has been touring dynamic social-issue plays to students throughout the Pacific Northwest since 1985. The Road Company reaches tens of thousands of students each year with productions that address relevant social issues and provide youth with safe steps to approach them. In addition to the touring productions, Taproot Theatre provides teachers’ guides and resources to facilitate classroom discussion and increase the effectiveness of the message. The actors are also available for individual classroom visits. To book a show, contact Taproot’s Director of Outreach at 206.529.3669 or touring@taproottheatre.org.